Home News and Insights Is there an end in sight for PPI?

Is there an end in sight for PPI?

In the last nine years the payment protection insurance (PPI) mis-selling scandal has cost banks £37.3bn - about four times the cost of the 2012 London Olympics - and has resulted in a fundamental shift in the relationship between a financial service provider and its customers.

As the Financial Conduct Authority considers imposing a deadline for making PPI claims, we explore the possible scenarios facing financial organisations in what could be one last push before the most expensive issue to hit the UK Financial Services industry is finally put to bed.

The unprecedented scale of PPI

There is no doubt that Payment Protection Insurance (PPI) has been a huge issue for the UK Financial Services and it is worth reminding ourselves of the sheer scale of the scandal. 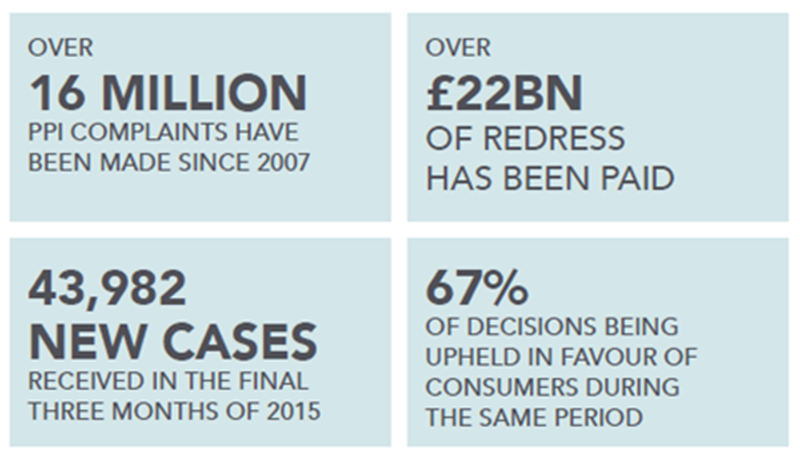 In November 2015 the FCA released Consultation Paper CP15/39 - Rules and Guidance on payment protection insurance complaints and a deadline of February 26 for firms to respond to the proposals was set. The final announcement following this consultation is still pending, but in preparation for an imminent announcement, firms should be aware of the consultations contents and be ready to take action when the new rules are announced.

The industry's reputation has taken a hammering as a result of this issue and financial services organisations have invested heavily in their complaint handling, remediation processes and customer service functions in order to repair the damage.

However, after years of operational impact, surely the end is finally in sight for PPI complaints?

In November 2015 the FCA released Consultation Paper CP15/39 - Rules and Guidance on payment protection insurance complaints and a deadline of February 26 for firms to respond to the proposals was set. The final announcement following this consultation is still pending, but in preparation for an imminent announcement, firms should be aware of the consultations contents and be ready to take action when the new rules are announced.

What is the FCA proposing?

Key points from the Consultation Paper were as follows:

Is this the beginning of the end?

Assuming the new rules are introduced as proposed, firms will have an end date to plan for and are expected to view this as a positive step. The big unknown is: what will happen to PPI complaint volumes during this period?

One early impact is expected to be on the activities of Claims Management Companies (CMCs). In February 2016 there were media reports that one CMC might launch legal proceedings against the proposed deadline on the basis that it was unlawful and plans for a communications campaign were inadequate.

At the time of writing, this had not yet taken place yet it certainly highlights the strength of the objection to these plans from a section of the industry for whom managing PPI claims is a major source of revenue.

The proportion of PPI complaints received via CMCs has consistently been above 40% in recent years and the National Audit Office recently estimated that CMC PPI revenue was between £3.8bn and £5bn. The introduction of a deadline could encourage CMCs to redouble their efforts to maximise business in this end period.

Some CMCs have already begun to make reference to a deadline in their advertising and this could increase further as they seek to attract new customers before the FCA campaign takes effect. Other firms have chosen to build relationships with CMCs in order to enhance operational effectiveness and this could be a consideration for all when assessing future strategy.

Some consumers could see an "official" campaign as having the credibility that commercial advertising may lack, encouraging them to make a PPI complaint they had previously put off for various reasons. This could lead to a sharp increase in PPI complaint volume as experienced from 2010-2012, when resource models and capacity plans for many complaint handling operations had to be revised on a regular basis and service levels were stretched or, in some cases, breached.

At the other end of the spectrum, there is a very real possibility that there might not be a noticeable impact on new complaint numbers. As the consultation paper states, firms have already proactively contacted around five million customers who may have been mis-sold PPI in the past and two thirds of British adults have received a phone call, text message, e-mail or letter from a CMC about PPI. Add in the number of TV and radio adverts relating to PPI and there is a strong argument that consumer awareness is already high. Let us also not forget that PPI is an insurance product, so there is a populus who knew what it was and opted for it to be included, so subsequently have not complained because they know they have no legitimate grounds to do so.

The consultation paper proposals on Plevin relate to specific types of complaints about the amount of commission earned from a PPI sale and whether non-disclosure of this amount to a customer resulted in an unfair relationship under section 140B of the Consumer Credit Act. The paper stresses that the guidance provides for some flexibility but suggests that when commission exceeded 50% then failure to disclose this to cus­tomers did give rise to an unfair relationship.

The paper proposes that appropriate redress would have three elements: 1) the difference between what the customer paid and 50%, 2) the historic interest the customer paid on that amount and 3) annual simple interest at 8% on the sum of 1) and 2). However, it also states that firms should consider whether a different form of redress is required to remedy the unfair relationship. Whether any firms would choose to move away from the three-stage approach outlined in the paper is questionable, but this wording does provide an opportunity for firms to be innovative and consider other options.

It is a positive for firms that the paper states there will not be an expectation on them to proactively review past sales or previously rejected complaints linked to the scenarios raised in Plevin. However, the fact that it is called out as a specific sub­ject will raise the awareness of this type of complaint and could result in an increase in volume. Firms should be able to assess whether commissions for past sales exceeded 50% and ensure they can calculate redress effectively for such cases.

What to plan for?

Given these unknowns, scenario planning should be something firms are considering and the availability of a flexible and knowledgeable workforce is key. Firms should be ready to move quickly if the PPI volumes do start to increase, but may not wish to recruit and train large numbers of staff for something that might not come to fruition. In this situation, contingency plans should be in place to maintain operational readiness, preparing for the future and also protecting service levels on other work streams from being impacted by PPI.

The good news is that many organisations are in a far better position to deal with the potential impact of a deadline, having already invested in their customer service and complaint handling processes, people and technology. However considering the changing tone coming from the major banks and other financial organisations as they seek to rebuild trust and loyalty through an increased focus on customer service and support, the last thing they will want is to see that hard work undone by being unable to cope with another spike in complaints and subsequent falls in the level of service they provide to all customers.

As such, early scenario planning and preparation is vital to protect an organisation's reputation and based on our past experience in dealing with PPI claims, we anticipate firms will need to be able to answer the following questions.

All these scenarios and more will be discussed at our upcoming roundtable event taking place after the summer in central London. To register your interest, email contact@hazellcarr.com.